At Datopian we’re moving to job stories from user stories.

Like user stories, job stories are a great way of gathering requirements. They are especially used in an agile environment, where one of the key values is responding to change over following a plan.

Job stories give the team more context for the user’s situation and allow them to share their viewpoint and create a solution for what the user wants to do.

Job stories are very similar to user stories with one key difference: personas becomes contexts (and jobs). We prefer job stories to user stories because they focus on a job to be done rather than a persona – “When I’m on the morning commute and bored” vs “As a a middle-aged, educated person”.

Here is a short 6m introduction to Job to be Done by Clayton Christiansen which is really excellent:

When <situation/context>, I want to <motivations>, so I can <expected outcome>.

When I’m hungry, in a rush, and not sure when I’ll be able to eat next, I want to be able to eat something ‘on the go’ with one hand so I can satisfy my hunger and make it to my appointment on time.

It is about understanding what-is, not creating a what-should-be.

# The More Context, the Better

In the image below, the following solutions could work:

In case the product has multiple roles or characters (different from personas), it can be helpful to include the role or character in the ‘When …’ clause.

This would be similar to the ‘As a …’ clause in a user story.

Using eBay as an example:

When a buyer has already made a bid on an item, they are anxious about missing a counter bid and want to immediately receive counter bid notifications, so they can have enough time to evaluate and update their own bid.

In this case it is helpful to clarify who we’re talking about, a buyer or a seller.

You can read more about characters here: https://medium.com/down-the-rabbit-hole/replacing-personas-with-characters-aa72d3cf6c69

# Why Personas are Not That Useful

As Alan Klement writes in Replacing Personas With Characters:

Because personas focus on creating a story made up of a customer’s attributes, instead of a story that explains a purchase, personas leave the brain in a unsatisfied state. To fix this, in just a split second, the brain decides to make up it’s own story.

Explanation of why it’s important not to insert solutions when designing a job story:

A good introduction to the Jobs to be Done theory:

For a more in depth look into the Jobs to be Done theory:

# The Problem With User Stories

When I used to write user stories with my team, my teammates would read them, think they understand them and then go on with their own interpretation of the story, which ended up being different than mine. I started noticing the problem was with the user stories, and not me, when different engineers would interpret the same story very differently.[3]

As a <persona/role>, I want to <action>, so that <outcome/benefit>. 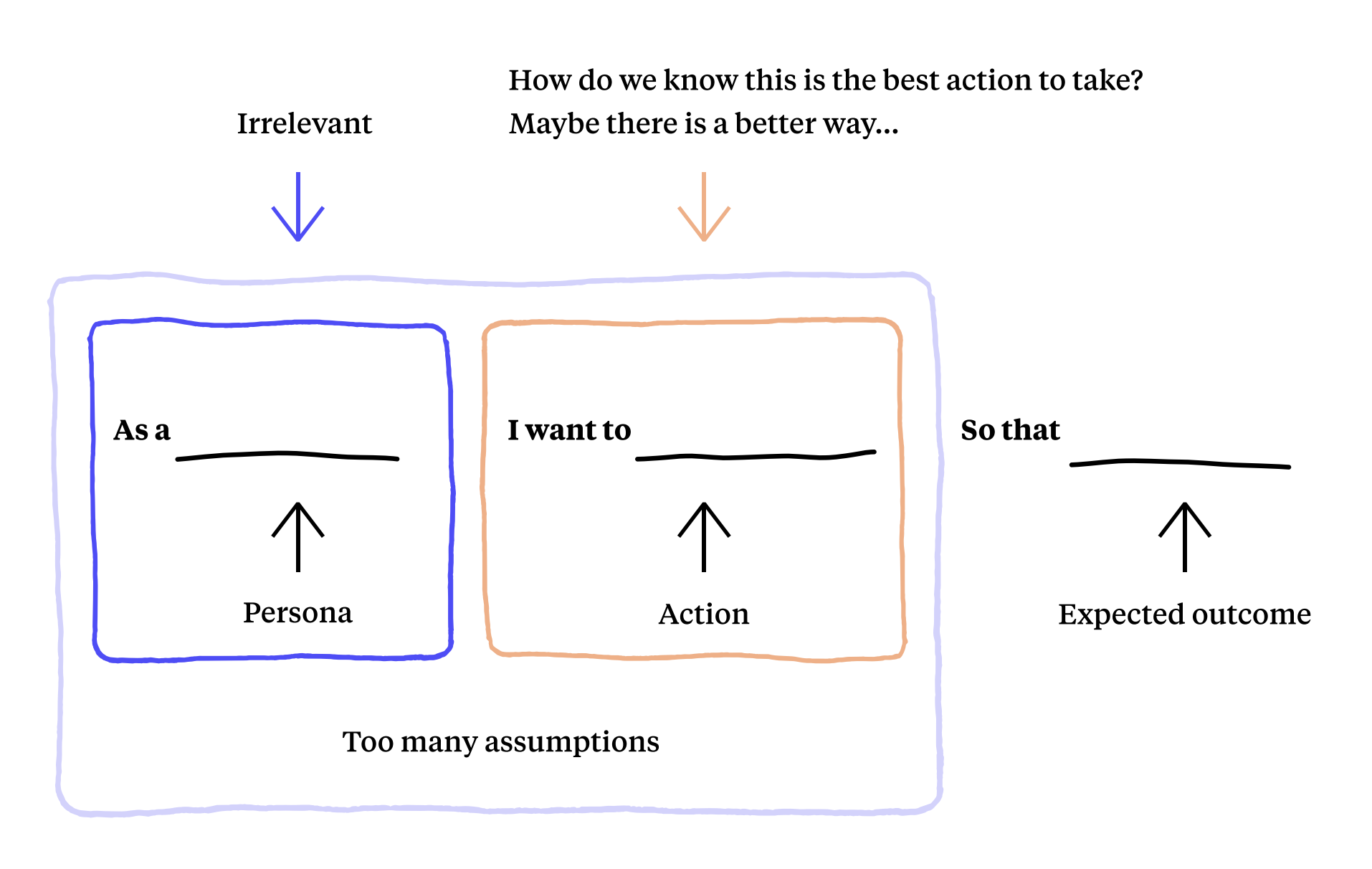 To understand why personas are irrelevant, take a look at the following series of user stories:

Does having the persona/role in there add much?

# The Theory Behind Job Stories

Jobs-As-Progress: a theory that is promoted by Clayton Christensen, Alan Klement and Bob Moesta.[4]

The phrase “jobs to be done” carries a lot of meaning with it. The three most important parts are:

Theory tells you how and why things happen, not what you should do about it. Theory is descriptive, not prescriptive.